Uruvi, a beautiful princess born into a blue-blooded royal family falls head over heels for a low-born but radiant and talented young archer, Karna. The warrior Pandava Prince, Arjuna had his heart set on her. But Uruvi boldly rejects Arjuna’s overtures to marry Karna, his step brother and become the outcaste’s queen.

In a contest, young eligible warriors, from all over ancient India came to display their strength and talent and win the heart of the beautiful princess – Uruvi.  Secretly, her parents had promised her hand to Arjuna, the valiant and eligible Pandava prince. But in the contest, Uruvi’s eyes fell on a kind yet striking face, a young man with a golden armour, shiny hair and a daunting personality.  He was low born and his presence at the royal court was condemned.  But he had won the princess’ heart.  The man was Karna, Arjuna’s underprivileged step brother who was denied his rightful place in the Pandava dynasty.  But Uruvi’s love was beyond rank and honour. She boldly chose to tread a difficult path and sacrificed her privileged life at the altar to become the outcaste’s queen. But will Karna’s tumultous life create a turmoil in their love too? 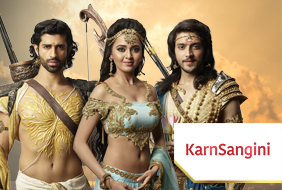