A poignant love story of star crossed lovers, Saras and Kumud, who pine for each other but destiny denies them the joy of coming together.

Saraswatichandra (Saras) is a young, cultured aristocrat from Dubai. His father, Laxminandan, arranges Saras’ wedding with Kumud, the well-educated and ravishing daughter of his best friend, Vidyachatur. However, Saras, who is distraught at the death of his mother, refuses to marry her. He visits her family to convey his rejection but eventually falls in love with Kumud and a short but deep romance follows. Saras returns to Dubai to inform his family of his changed decision but becomes the target of a series of evil plots hatched by his wicked step-mother Gumaan. A shattered and disheartened Saras disowns his family and moves out of his house. Disenfranchised by his family, Saras feels that he is not worthy of Kumud anymore.  He cancels the wedding. To save her family’s reputation, a heartbroken Kumud is forced to marry Pramod, an alcoholic, who mistreats her. A wild turn of events brings Saras back into Kumud’s marital house and despite their strong love and attraction for each other, they stay loyal to Kumud’s marital oath. Saras makes it his life’s agenda to reform Pramod, for Kumud’s happiness, but eventually, Pramod de-generates into madness and attempts to kill Kumud. A tortured Kumud is forced to separate from Pramod and unite with Saras. Saraswatichandra is a classic tale of intense love, heart ache, yearning and longing between two people, who despite knowing that they can never be together, sacrifice themselves for each other. 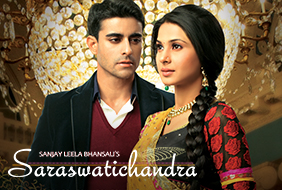